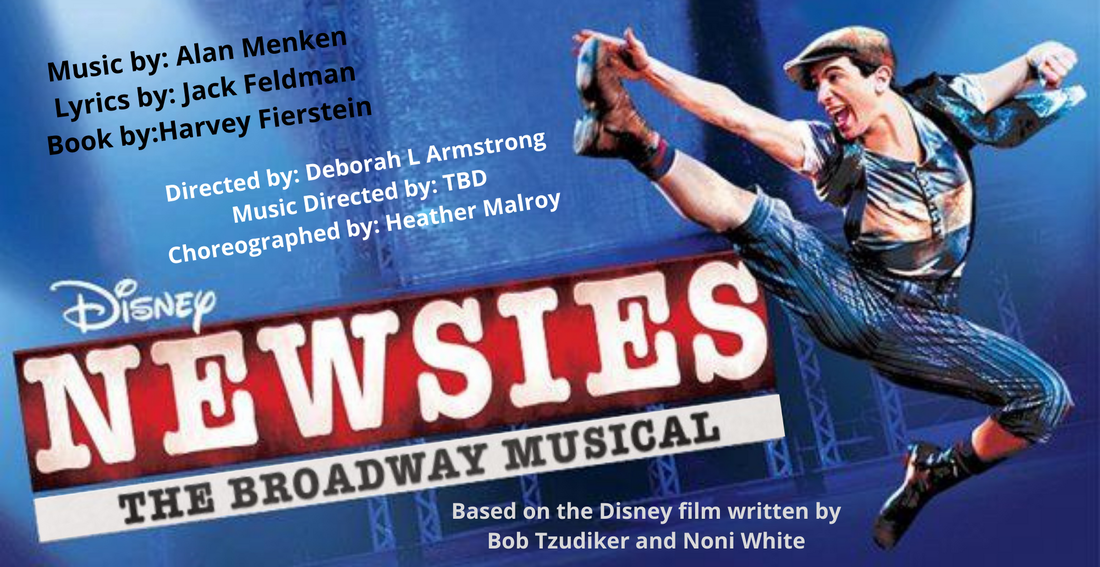 Set in turn-of-the century New York City, Newsies is the rousing tale of Jack Kelly, a charismatic newsboy and leader of a band of teenaged "newsies." When titans of publishing raise distribution prices at the newsboys’ expense, Jack rallies newsies from across the city to strike against the unfair conditions and fight for what's right!

Based on the 1992 motion picture and inspired by a true story, Newsies features a Tony Award-winning score by Alan Menken (Little Shop of Horrors, Sister Act) and Jack Feldman and a book by Tony Award winner Harvey Fierstein (Kinky Boots). Featuring the now classic songs “Carrying the Banner,” “Seize the Day,” and “Santa Fe”.

Those wishing to audition in person during March 26th MUST schedule a 10-minute audition slot by signing up through Casting Manager at castingmanager.com/audition/info/ezUdVL91K74NteI (preferred)

Submission by Video
If a student isn't available March 26th, video auditions may be submitted no later than April 3rd
to Debbie Armstrong at darmstrong@lakewoodplayhouse.org

Students should prepare a 2 minute or less monologue (any kind) and 48 bars or verse and chorus from a standard musical.

Please email or bring a headshot and resume.

If you are auditioning in person, please bring marked sheet music (WITH piano accompaniment), or you may sing to prerecorded (karaoke) music. Speakers and Pianist will be provided. If singing to live accompaniment, NO SONDHEIM.

All who audition will know no later than April 4th if they have been called back, and casting will announced 5 days after callbacks.

Also, if you are called back, you will be required to bring 1 letter of personal recommendation (not from a family member), and 1 letter of academic** recommendation (i.e. teacher or homeschooled equivalent).
**We are not looking for a GPA, but a letter that states you are a solid student who studies, focuses in the classroom, turns in work on time, a willingness to work hard, and overcomes challenges presented to him/her/them.